This is a personal note for my study. There might be some errors, so if you notice them, I'd be happy to let me know.

The notation here follows Causal Inference: What if.

Here is a link to this book.

There are several methods to estimate the causal effect of a treatment A on an outcome Y. For example,

All of these methods above need to adjust covariates L to achieve conditional exchangeability though in different ways. How do we select such covariates?

A means to select covariates to be used to predict an outcome Y cannot be applied to the selection of covariates for causal analyses. Hence, this chapter summarizes the ways to select variables for the adjustment.

18.1 The different goals of variable selection

Here are methods for the selection of variables for predictive purposes.

Selection of variables for predictive purposes

Start with no variables. In each step, add the variable that leads to the greatest improvement. Stop when no further improvement.

Start with all variables available. In each step, eliminate the variable that leads to the greatest improvement. Stop when no further improvement.

a combination of forward selection and backward elimination.

Use LASSO regression. If parameter estimates are nearly 0, then eliminate these variables. Again, fit some regression model.

18.2 Variables that induce or amplify bias

Imagine you have the unlimited computational power and a dataset with a quasi-infinite number of individuals and many variables measured for each individual including a treatment A, an outcome Y, a large number of variables X. Some of X might be confounders of the effect of A on Y.

Then, Shouldn't we adjust for all measured variables X using stratification/outcome regression, standardization/g-formula, IP weighting, or g-estimation? The answer is NO! Let's see some examples where adjustment introduces biases.

Selection bias under the null

Consider the figure shown below. 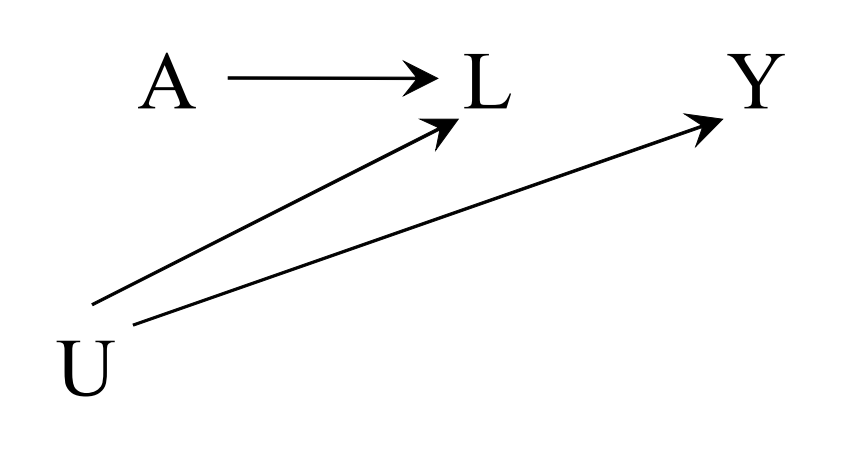 There is no effect of A on Y, so the average causal effect is zero. That is,

There is no confounding by L. Hence, we can unbiasedly estimate the causal effect by

See what happens if we adjust for L. We estimate the causal effect via g-formula:

In the above DAG, L is associated with A, so

Therefore, generally, the estimate of g-formula is not equal to

, thus is biased. When A-Y association adjusted for L is expected to be non-null even though the causal effect of treatment A on the outcome Y is null, we say that there is selection bias under the null.

Selection bias under the alternative or off the null

There is no confounding by L, so

Adjusting for L via g-formula, the average causal effect is

For the same reason,

Therefore, the estimate of g-formula is biased. If A-Y causation was null, A and Y would be independent whether we adjust for L or not. Only when there is a causation between A and Y, there is a bias. That is why we call this kind of bias selection bias off the null.

Next, consider the DAG. An adjustment variable that is affected by A and affects Y is called a mediator. If we adjust for a mediator, that blocks the effect of A on Y that goes through L, introducing biases.

However, there is an exception where post-treatment variable can be used to block the backdoor path between treatment A and the outcome Y as shown in the figure below.

So, we cannot decide whether to adjust for L or not from the data but from information outside the data (e.g. experts' advice)

The myth of selection of adjustment variables

Next, we consider the question of adjustment for variables L. Assume that the temporal order is L A Y. It is said that an estimator that adjusts for all variables L minimizes the bias, which is a false belief. Consider the following DAG. 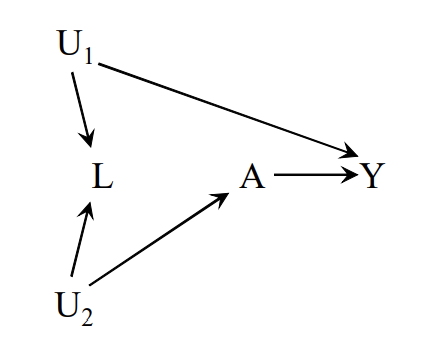 Think about the following DAG. 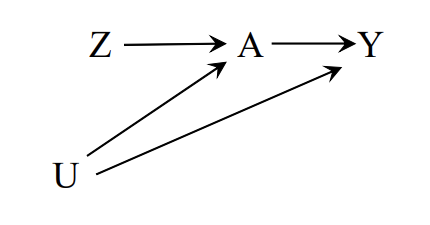 Putting the problems discussed previously aside, we assume that X includes o variables that may induce or amplify bias. Also, X has all confounders L of the average causal effect of A on Y. The next problem is when X is very high-dimensional.

When using the plug-in g-formula, we will estimate the mean outcome Y conditional on the variables X b(X).

When using IP weighting, we will estimate the probability of assigning the treatment conditional on the variable X π(X).

Traditionally, we use a parametric model such as linear or logistic regression to estimate b(X) and π(X). But, when X is high-dimensional, for example, the number of samples is much smaller than the dimension of X, the traditional parametric models do not work. Therefore, we have to come up with solutions.

Use lasso to eliminate the variables automatically.

However, there are two major problems.

In the next section, we discuss how to solve these two problems with DR estimators.

In this book, there is no accounting for why sampling splitting and cross-fitting, which we describe below. Under certain conditions, applying these two methods enables us to construct a consistent doubly robust estimator that will asymptotically follow a normal distribution with mean at the true value of the causa parameter.

18.5 Variable selection is a difficult problem

Doubly Robust Machine Learning (DRML) does not solve all our problems for at least four reasons.

The last problem could be solved by removing the variables that is strongly associated with the treatment A. But the removed variables might be potential confounders to eliminate the bias.

The best way is to carry out multiple sensitivity analyses and look at all the results. If we get similar results, we are confident in the results. If not, let's try to understand why?

Login to quote this blog

You cannot quote because this article is private.